You are here: Home / It was epic. It was exciting. It was 70 years in the making
VIEW ALL ARTICLES
ABCO is Now a NAVAC Full Line Distributor.
Daikin Air Quality Index on The Weather Channel
Energy-Saving Efficiency with ABCOOLAIR
Customer Appreciation Month
2021 Spring Specials
ABCO + Daikin = Global Solutions Locally Delivered
ZoomLock Max
HAPPY HOLIDAYS
Our Commitment to You
Helpful Refrigeration Resources for New DOE/AWEF and SNAP Regulations

It was epic. It was exciting. It was 70 years in the making 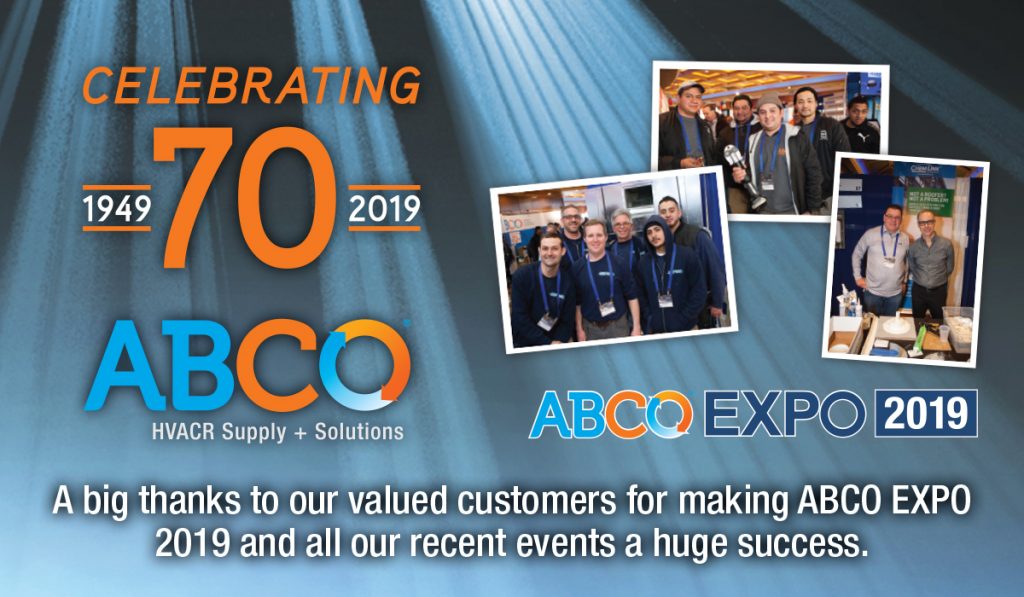 It was the 2019 ABCO EXPO, the largest independent HVAC and Refrigeration trade show in the Northeast. Held at Terrace on The Park in Flushing, NY, this year’s EXPO had added significance: it was a celebration of ABCO’s 70th year. Helping to mark the occasion, were more than 3,500 HVAC and Refrigeration manufacturers, contractors, builders, engineers, students and instructors, engaging with over 180 exhibits, product demonstrations — and each other.

American Standard Heating & Air Conditioning showcased the # 1 rated brand of equipment to contractors, builders, engineers, architects, students and instructors. Featured products included the Silver 16 and Platinum 19 Low Profile Series, designed to perform in the tightest of spaces, and new S8X1 | S8X2 single-stage furnaces that are rated with 2-stage outdoor systems. The ABCO/American Standard Residential Package Deals, an exclusive ABCO resource that makes it easy sell the best performing system for every home and budget, was also released at the show.

Luxaire, Mueller, Scotsman, Honeywell and other industry leaders were also on hand to meet attendees and present their new products.

In addition, ABCO customers and partners showed how they to give back to the community with the Make-A-Wish raffle that raised thousands of dollars for children with life-threatening illnesses. The ABCO EXPO continues to establish and renew relationships and promote the exchange of important information and ideas in an exciting format.

ABCO CEO Michael Senter expressed his gratitude for partnership: “As we celebrate our 70th anniversary, I credit our success to the trust ABCO has worked hard to build over those many years. I also acknowledge our teamwork and friendships formed to strengthen that trust.”

On behalf of ABCO’s Sales Account Managers and our entire ABCO Team, we’d like to thank our customers who attended ABCO EXPO 2019. Our deepest gratitude also goes out to all our customers for your business, friendship and support. We look forward to serving you each and every day as we strive to exceed your highest expectations.